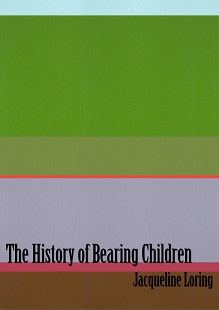 The History of Bearing Children won the 2012 Doire Press International Poetry Chap Book Prize in Ireland. In July 2012, I traveled to Galway to meet Lisa Franks, owner and publisher of Doire Press, and to accept the prize which included 75 books and a reading at the Galway Library.

Lisa Franks called me one dreary March day to extend her congratulations to me for winning the Doire Prize over an international field of poets. I was overwhelmed with the news. Stunned, actually. It is with tremendous respect for the quality of the book that I thank the staff of Doire Press.

Only a few months earlier, in the spring of 2011 my husband Gary asked me why I wrote poetry if I didn’t plan to publish. I had tried over the years, but with little luck. My opinion that no one was interested in the poetry of the wife of a Vietnam veteran did not impress him. He challenged me to get a book published.

For almost 20 years, he had supported my attendance at the summer writers   workshop at the William Joiner Center for War and Social Consequences at the University of Massachusetts, Boston where the majority of the instructors and many of the participants were Vietnam veterans or writers whose work discusses war or warring. Poets Gary Rafferty, Preston Hood, Pauline Hebert and David Connolly soon became my classmates and friends.

The list of poets and writers who contributed to my knowledge of writing and the craft of writing poetry would be more extensive if I included the faculty at other conferences such as the summer Cape Cod Writers Conference. Some of the poems that were influenced from these classes and teachers can be read in History. There are many more teachers and mentors I have not yet added to this list.

In 2011, my husband and I discussed the content of my manuscript which at that time was titled, â€˜Wedding Vows.â€™ The reality behind most of the poems I had written over the years was that they could have been considered â€˜family secrets.â€™ Gary continued to be supportive of the need for the poems to see the light of day.

I immediately bought a one year subscription to Poets and Writers Magazine and, with the help of a writer friend, began to edit old poems and to look for contest that publish books as their prize. My concern was not only whether the poems were publishable, but whether or not there was anyone out there who would even read them. From Poets and Writers, I found contests and began to send out six or eight poems at a time. To my surprise, I found my name long and then short-listed in several contests. And then the call from Lisa. I knew the universe had answered us.

The Doire Press prize came a team of folks whose mission it was to make The History of Bearing Children the most professional book it could be.

Anna McDonnell Dowling was responsible editing and layout and Michelle Coleman worked with me on the cover design. With Lisa at the helm, I can’t imagine a more professional group. Working with them was a pleasure, hard work, but amazing and professional.

THE COVER
HOW THE COVER ART WAS CREATED.
Once Lisa Franks convinced me that I had actually won the Doire Prize, she told me to consider what the cover would look like. I didnâ€™t have to think hard.

A longtime friend of mine, Cape Cod artist Jane Lincolnâ€™s new paintings immediately came to mind. A bleeding of color is how I would describe them- not a very arty description I know.

On her web page www.janelincoln.com I found several paintings that were beautiful and called her to ask if I could use one. She said, â€œNo!â€ but she would paint me an original. Again, amazing!

After she read my manuscript Jane sent me a painting of her vision of my words in color. The painting brought me to tears.
I have always felt that life with a Vietnam veteran is complicated by something unknown, like experiencing my day through a filter, or seeing the world from behind a screen. In Jane’s cover art the triple canopy jungle is more than half the color you see on the cover. Perfect.”
And why does having Jane’s cover art for the History of Bearing Children feel like a gift from the universe? In my earlier life, I was a nurse and worked in the labor and delivery departments at both Cape Cod and Falmouthâ€™s hospitals. I was also a Lamaze Childbirth Educator. Jane and her husband, Stan,Â attended my classes for the births of their beautiful daughters. Jane and I haveÂ remained fast friends ever since. Our friendship grew to anÂ appreciation ofÂ each otherâ€™s art. One year, Jane invited me to join her and the Cape Cod Painters on their week-long adventure to Ghost Ranch in New Mexico. My sister, Clare and my friend, Judy, joined in the adventure.
Each time I read from my book, I will thank Jane and hope that everyone who sees it will know what a genius she is with color.

To buy a copy of The History of Bearing Children email me at jacquelinemurraloring@gmail.com for more information. The cost is $10.00.

or go to Amazon.com

The History of Bearing Children readings:

****
The Bourne Council on Aging
A POETRY READING and RECEPTION with JACQUELINE LORING
Monday, September 17, 2012m 239 Main Street, Buzzards Bay, MA.
The Bourne COA was proud to host two award winning poets for a program dedicated to the wives and families of veterans who have served in all wars and conflicts.

â€œHonest and enlivened by occasional flashes of humour, these poems are a luminous testimony to a womanâ€™s determination to salvage what she can from the wreckage of war in order that healing and scarring of wounds can occur.â€ Eva Bourke, Piano (Dedalus Press)

Jacqueline will be joined by her friend of many years and fellow writer Preston Hood, author of â€˜The Hallelujah of Listeningâ€™ recipient of the 2012 Maine Literary Award for Poetry. Preston Hood served with Seal Team 2 in Vietnam in 1970.
Books will be available for purchase and signing during the reception that will follow the reading.